BURNABY, BC, Feb. 6, 2020 /CNW/ - Scotiabank is excited to bring Scotiabank® Hockey Day in Canada (SHDiC) – a cross-country celebration of hockey – to Burnaby's Scotia Barn on Saturday, February 8. As part of the celebration, Canlan Ice Sports and Scotiabank will be unveiling the newly installed Scotia Barn signage with local kids' community hockey teams. The event will feature a free public skate, a special appearance from hockey alumnus Chris Higgins and exciting giveaways.

As the title sponsor of the 20th annual Scotiabank Hockey Day in Canada, Scotiabank is proud to support this celebration of hockey. SHDiC is taking place this year in Yellowknife, Northwest Territories, February 5-8, and continuing with celebrations across the country in three satellite locations: Burnaby, British Columbia; Churchill, Manitoba; and Ottawa, Ontario (A Rogers Hometown Hockey stop).

Scotiabank Hockey Day in Canada is about much more than just the game of hockey – it's about coming together as a community. Scotiabank is committed to supporting every goal, on and off the ice. Scotiabank believes hockey teaches kids values and lessons that they can use outside the arena, and for the rest of their lives. Helping kids succeed on the ice means helping them succeed everywhere. Since 2008, Scotiabank has proudly supported one million kids and counting. Hockey matters to Scotiabank because it matters to Canadians. We are fans, coaches, and players.

Sportsnet will be onsite capturing how the people of Burnaby are celebrating Scotiabank Hockey Day in Canada at Scotia Barn.

(Each public skating session will be limited to 175 people)

The event in Burnaby is part of the country-wide celebration for Scotiabank Hockey Day in Canada, the biggest celebration of hockey in the nation, which brings kids' hockey clinics, games and NHL® celebrities to communities across Canada. The broadcast – featuring all seven NHL® teams –  starts at 1 p.m. ET/10 a.m. PT on Sportsnet, Sportsnet ONE, CBC, and Sportsnet NOW. All matchups will also air on NHL Live. The full schedule can be found here.

Cheer on your team using #HockeyDay for a chance to win!*
No matter where you live in Canada, everyone can get involved in Scotiabank Hockey Day in Canada. Post on your favourite social channel using the hashtag #HockeyDay sharing which Canadian hockey team you are cheering for on Saturday, February 8! The contest runs from Monday, January 27 – Saturday, February 8, 2020.  The grand prize is a trip for two (2) to a destination in the Great White North. Secondary Prizing includes Four prizes of $5,000 investments. Full rules and regulations are available here.

Scotiabank is the Official Bank of the NHL®, NHL Alumni, Toronto Maple Leafs (who play at Scotiabank Arena), Winnipeg Jets, Calgary Flames (who play at the Scotiabank Saddledome) and Edmonton Oilers, and it also supports the Montreal Canadiens. Scotiabank's Community Hockey Sponsorship Program has supported over one million kids and counting through its involvement with minor hockey teams in communities across Canada, since 2008. To find out more about Scotiabank's hockey programs, please visit ScotiabankHockeyClub.com or through social media on Instagram, Facebook and Twitter.

Canlan Ice Sports is a North American leader in recreational sports. From the development, operations and ownership of multi-purpose facilities, to fun and inclusive programs and leagues, the Canlan community are stewards of sports. As the one of the largest operators of recreation facilities in North America, Canlan owns, leases and manages 20 facilities, which include 53 ice surfaces, 5 indoor soccer fields, and 15 sport, volleyball, and basketball courts. Learn more about Canlan at icesports.com. Canlan is listed on the Toronto Stock Exchange under the symbol, ICE.

NHL, the NHL Shield and the word mark and image of the Stanley Cup are registered trademarks and NHL Alumni name and logo are trademarks of the National Hockey League.  © NHL 2020.  All Rights Reserved

* NO PURCHASE NECESSARY. Contest runs from January 27, 2020 at 12:01 am (ET) to February 8, 2020 at 11:59 pm (ET). One (1) grand prize winner will receive a trip to the Great White North for a total approximate value of $18,000. Four (4) secondary winners will each receive $5000 CAN to be deposited into any eligible Scotiabank Account. Odds of winning depend on total number of eligible entries received. Open to Canadian residents who have reached the age of majority at time of entry. Skill-testing question required. Some conditions apply. See full Official Rules at www.scotiabankhockeyclub.com/hockeyday for complete details. 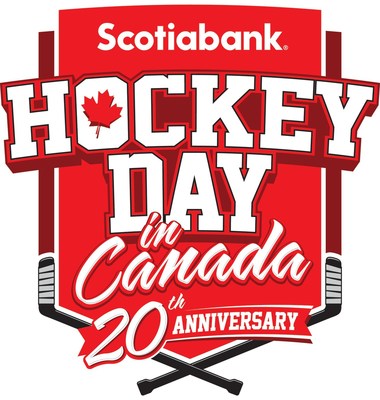